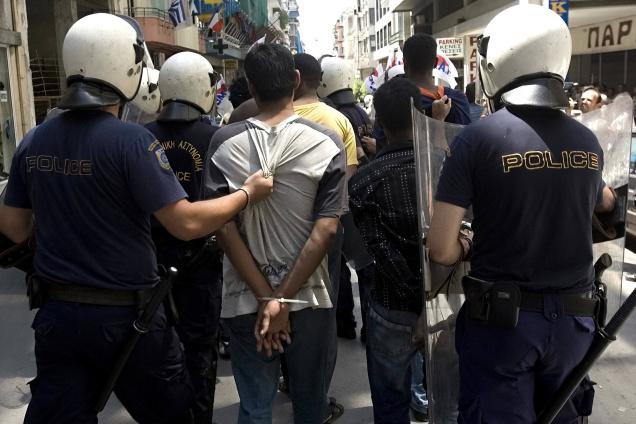 On the 13th of October, a large-scale European police operation starts that targets undocumented migrants.

It has become a tradition. Each time a country receives the presidency of the EU, it launches a large-scale action against migrants. Coincidence or not, with Latin or Old Greek names. Aerodromos, Aphrodite, Perkunas are the names of the actions of Greece, Cyprus and Lithuania respectively during their presidencies.

On the 10th of July, not even two weeks after Italy got the presidency of the EU, a police operation was announced. This action will be led by the Italian Ministry of Interior Affairs in ‘close cooperation’ with Frontex, Europol and the Schengen member states. The action received the name Mos Maiorum, which literally means ‘custom of the ancestors’. It refers to the first centuries of the Roman Republic.

In not one European media, mainstream or alternative, nor from any politician, have you heard about Mos Maiorum. In practice, between the 13th and 26th of October, approximately 20.000 police officers will be deployed in operations ranging from increasing checks in airports, stations, trains, highways to house searches. The main aim is to gain a better insight in the migration routes and to arrest as many undocumented migrants as possible.

The operation is presented as prevention against organized crime and human trafficking, but we know from the past that this is just an excuse. During previous operations, practically no human traffickers were arrested; only undocumented migrants who ended up in detention centers and ultimately were deported. In addition, Europe wants to extend the databases of Frontex and Europol through these kinds of operations.

Refugees are seen as a threat. The new migration streams are presented as questions of security and criminality while they are a consequence of wars and conflicts, especially in the Middle East and Africa.

Since World War II, there has never been these many refugees. According to numbers of the United Nations, there are 51 million refugees. Only in 2013, 17 million people were on the run. In Europe, we are convinced that all refugees of the world are coming here. However, in 2013, there were only 435.385 applications for asylum in the 28 European member states. Not that big of a deal.

On the other hand, Europe is the most dangerous destination for people on the run. According to research, since 2000 at least 40.000 migrants lost their lives on the way to Europe. The Mediterranean Sea has become a mass grave. This has to do with Fortress Europe. European countries and the EU have invested billions of Euros to protect their borders. In the buffer zone around the EU approximately 2 billion Euros were invested. Frontex received in 2013 as much as 85 million Euro. Europe launched last year Eurosur, in charge of the European border control, which will receive during the next 6 years approximately 250 million Euro. The number of cameras and kilometers of fences on the European borders is exaggerated. Tens of thousands of border patrols were hired to be based at the borders, from Bulgaria to Spain. In countries as the UK, Hungary and Austria, refugees are locked up in jails. In Greece, Malta, Poland and Bulgaria even non-accompanied minor asylum-seekers are locked up.

The security and criminalization policies that Europe is executing and operations such as Mos Maiorum are a violation of the European Agreement to protect human rights, in particular the right to freedom and security. According to researchers and refugee organizations, human traffickers are the ones that take advantage of the current European policy. As soon as a route is closed, the smugglers are looking for new routes that are more dangerous and more expensive for migrants.

It is evident that action should be taken against human traffickers. But to achieve this, operations such as Mos Maiorum are not necessary. There are sufficient laws at the level of states and at the European level to tackle crime. Police and justice need to be more effective. The top persons of human trafficking are still walking the streets and we know who they are.

There are millions of people on the run because of wars, but since recently the amount of refugees is even greater because of natural disasters. The billions of Euros that are spent on the security of borders, could be used to establish legal trajectories to Europe. By enabling safe access routes, not only more lives will be saved, but it will also help to fight human trafficking.

The current European policy considers migrants as a threat, but without them Europe would be in an even deeper crisis. Tens of recent reports and researchers demonstrate that migrants play a crucial role in the European economy. In the UK, for instance, migrants have contributed 32 billion Euros to the economy. In the new Swedish government, there are four ministers with a migration background. Aida Hadzialic arrived at the age of 5 as a refugee from Bosnia and at age 26 she is the youngest minister in the government. Migrants are people who want an opportunity, but today these opportunities are taken away by Europe, while it actually really needs these people.

Bleri Lleshi is a political philosopher and author of various books.

Translated to English from Dutch by Natalie Lefevre