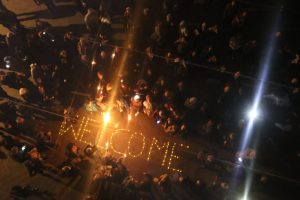 1st May, the International Workers Day, is not just a day to remember the past century’s achievements of the worker’s movement. More than 130 years after the worker’s revolt in Chicago, the realization of labour rights and social justice remains at the heart of our struggle and is a contemporary and urgent concerns.

The European Treaties adulate the market, austerity and neoliberal policies, breaking down workers’ conquests and attempt to diminish their victories by reducing pay, contributing to deteriorating working conditions, weakening collective bargaining and limiting workers’ and trade union rights. Neoliberal structural and market reforms impose more flexibility in the interest of the employers, less workers’ protection and weakening the trade unions.

The migrant workers and refugees suffer even more of the negative effects of the neoliberal policies as they are designed as scapegoating. This phenomenon aggravates racism and xenophobia within society which end up putting the working class against its own.

We, as progressive and ecological forces from all around Europe, support the struggle of the working people and the unions against the neoliberal attacks, as we strive for a better future for all the world’s people.

Workers and people need a Europe that abandons the profit-maximizing logic and puts people first. We need to start over on different bases and construct a Europe where solidarity trumps competition, and fundamental social rights trumps economic freedoms. Social dumping must end. Quality employment is necessary, not just minimum standards. Collective bargaining must be promoted and strengthened in order to increase wages and to improve working and living conditions.

Building a fundamentally different Europe requires that the current austerity policies and military build-up be ended and replaced by an economic policy focusing on public investments for sustainable growth, ecological transition and quality jobs, and by policies supporting peoples’ rights in all aspects of everyday life.

We will be present at activities and demonstrations on 1st May 2018. And we invite Trade Union representatives to participate actively in the next European Progressive Forum to be held from 9 to 11 November 2018 in Spain.