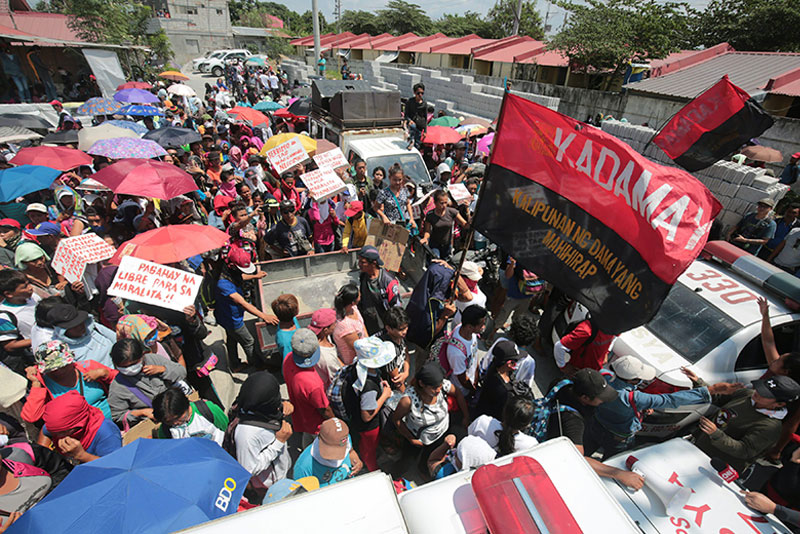 Migrante Europe condemns the violent dispersal by elements of the Quezon City Police District of hundreds of urban poor families who were staging a protest action inside the National Housing Authority in Quezon City on 22 November.

Led by the Kalipunan ng Damayang Mahihirap (Kadamay), the protesters were demanding for the distribution of some 114,000 idle government housing units in the country.

Numerous protesters were badly injured as police charged with truncheons and bombarded them with water cannons. A campaign staff of Migrante International, Paul Reyes was among those injured. Despite his injuries, Paul was illegally arrested and detained in PNP Station 9, Quezon City, and is being charged with outrageous cases of malicious mischief, violation of BP 880, concealment of name and direct assault.

We fully support the call of the urban poor and informal settler families for the distribution of idle state-owned housing units in the country.

Homelessness in the Philippines
Estimated at over 3.1 million, the Philippines has the highest number of homeless people in the world. Roughly 1.2 million of them are children. Aside from these, over 1.5 million families across the country are classified as informal settlers.

The National Housing Authority (NHA) said the idle housing units originally meant for soldiers and policemen would be given to the poor and other beneficiaries once a law is passed allowing the redistribution of these government assets.

In a statement, however, Kadamay decried the provisions in the proposed law which designates that the redistribution will be for the use of “other government employees, public school teachers, barangay officials and the lowest of the income earners,” and not to the homeless and informal settlers.

Republic Act 7279 and ICESCR
There is a law, known as the Urban Development and Housing Act of 1992 (Republic Act No. 7279), which provides for a comprehensive urban development and housing program intending to “uplift the conditions of the underprivileged and homeless citizens in urban areas by making available to them decent housing at affordable cost, basic services, and employment opportunities.”

Furthermore, International Covenant on Economic Social and Cultural Rights (ICESCR) Article 11 (1) recognize the right of everyone to an adequate standard of living for himself and his family, including adequate food, clothing and housing, and to be continuous improvement of living conditions.

In the 25 years since RA 7279 was passed however, the housing problem is getting even worse. In March 2017, Kadamay led thousands of poor families who took over idle government housing units in Pandi, Bulacan. After several days of standoff with armed police, the Duterte government eventually relented and allowed the families to stay in the houses they occupied.

We call on the Duterte government to rein in his attack dogs and instead heed the demands of the people for the redistribution of idle public housing units to the homeless urban poor.

“We urge our compatriots abroad and friends of the Filipino people to strengthen our solidarity with the urban poor, the homeless and informal settlers in the Philippines in the pursuit of their just demands for decent housing. We need to be more vigilant and militant amidst the increasing repression of the Duterte government against the poor and oppressed,” concluded Fr. Herbert.