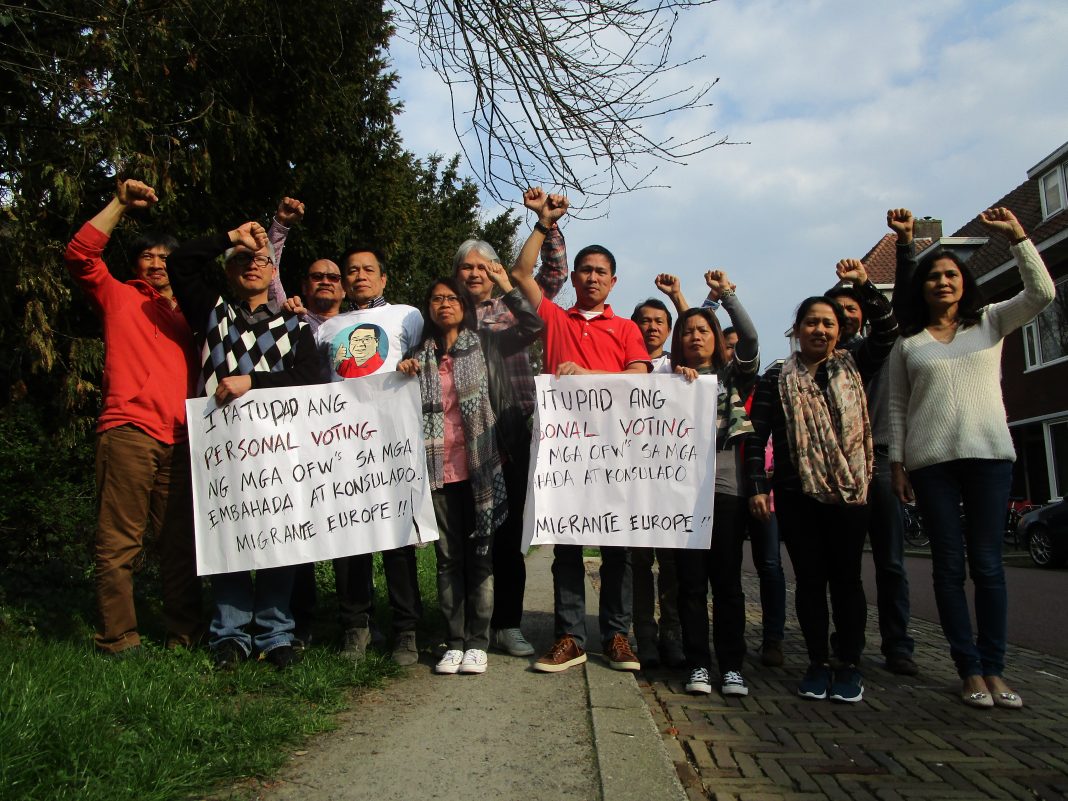 The postal voting to be implemented by the COMELEC for overseas Filipino workers in Europe during the Mid-Term Election is strongly protested by Migrante Europe.

According to the communications received by Migrante Europe chapters and members from the Philippine embassies and consulates, they shall adopt postal voting. There will be no personal voting for the purposes of the 2019 National Elections for senators and party-list representatives.

Postal voting for overseas Filipino workers is a procedure whereby ballots are sent by postal mailing to the voters and returned by post, in contrast to voters who are voting in person at a polling center or electronically via an automated election system.

“This new voting policy and procedure by the COMELEC may result in disenfranchisement and nonparticipation of thousands of registered Filipino voters in Europe,” lamented by Fr. Herbert Fadriquela Jr., chairperson of Migrante Europe.

According to Republic Act No. 9189, Sec. 2 – “It is the prime duty of the State to provide a system of honest and orderly overseas absentee voting that upholds the secrecy and sanctity of the ballot. Towards this end, the State ensures equal opportunity to all qualified citizens of the Philippines abroad in the exercise of this fundamental right.”

“Many registered voters don’t have stable addresses and there is no guarantee that they will receive their ballots, or if the returned ballots will be received by the embassies or consulates. We are appealing to the COMELEC and to the Duterte government for Filipinos to be given an option to get their ballots from the embassies and to adopt as well the personal voting of migrant Filipinos in Europe;” said Rhodney Pasion, Europe Electoral Campaign Coordinator.

Meanwhile, Migrante Europe chapter in Northern Italy had a positive dialogue with the Philippine Consulate in Milan last Sunday, 31 March 2019 regarding electoral concerns.  The April 5 deadline for the submission of forms for the overseas absentee voter who changed their addresses was prolonged until April 15. For those who request to get their ballots from the embassy/ consulate, it was extended until April 30.

To guarantee the transparency, accessibility, and accountability of the 2019 national elections, the following are the demands of Migrante Europe:

• An option to receive the ballots by allowing to get it at the respective embassies and consulates.

• Immediate notification related to absentee voting including the arrival of ballots.

“We call on the Commission on Elections and the Duterte government to address this urgent issue on ‘voter disenfranchisement’.” If the government is sincere to promote the active participation of the broadest number of Filipino overseas workers in the national elections, personal voting of OFWs should be adopted during the Overseas Absentee Voting to start on April 13-May 13, 2019,” concluded by Fr. Herbert. ###

Chaplain to the Filipino Community