Migrante-Europe is appalled by the utterly uncalled-for umbrage of the Philippine Secretary of Foreign Affairs, Teodoro L. Locsin Jr. when he confronted the protesters led by Migrante International in front of his department on 10 January 2020.

The protest held by Migrante-International and its allies denounced the militarization of the evacuation mission of the country to be led by Retired General now DENR Secretary Roy A. Cimatu. The Philippines’ deployment of two battalions of military combatants shows the apathy of the US-Duterte regime to the welfare of OFWs in the Middle East. What our kababayans need in this time of crisis are not soldiers, but social workers, health care professionals and translators.

We object to Sec. Locsin’s arrogance, when he yelled at the protesters and OFW families to beat him up and stating that “this is the government of President Rodrigo Roa Duterte (then raised fist),” instead of providing answers to the legitimate questions raised by the protesters and OFW families affected by the current turmoil brought about by the US assassination of top Iranian general Qasem Soleimani.

All Secretary Locsin succeeded in doing was to betray his utter ignorance about how diplomacy works, setting a dangerous precedent if his deplorable behavior is emulated by the wide following he claims for the government’s actions.

Migrante-Europe reiterates our ardent call, and challenges the US-Duterte regime to save our fellow OFWs in the Middle East and renounce the US imperialist war of aggression against the people of Iran.

No to US War on Iran!
Down With US Imperialism! 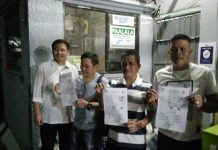