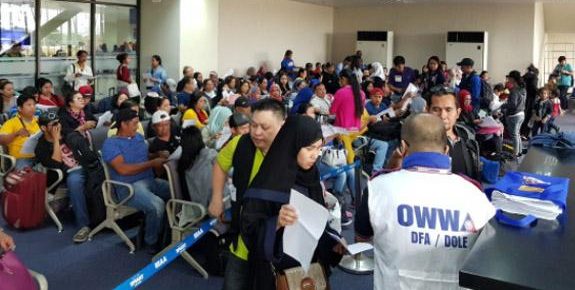 Filipino migrants’ alliance Migrante-Europe today expressed their strong disapproval of the new identification card to be issued by the Philippines’ Department of Labor and Employment (DOLE) to overseas Filipino workers (OFWs), saying that the IDs will not be issued free of charge, contrary to previous DOLE statements.

It was earlier announced by DOLE Secretary Silvestro Bello III that the OFW ID, which will be called iDOLE, will be given “to all bona fide OFWs at no cost”.

For years, Migrante International and migrants advocacy groups had been fighting for the scrapping of the OEC (Overseas Employment Certificate). The OEC was a requirement for every OFW who leaves the country, burdening them with additional unjust and excessive costs.

In August 2016, the POEA finally scrapped the OEC for returning OFWs and those hired through an employment agency’s in-house recruitment facility.

The so-called iDOLE was launched on 12 July. Bello described the ID as a major initiative of the Duterte administration in addressing the needs of the OFWs and the best gift of the president to migrant Filipinos.

“The processing of the iDOLE would be shouldered by the employers; hence, OFWs need not pay for the cost of the ID, which would be delivered by PhilPost to their respective addresses,” DOLE announced in a statement.

“We are disappointed that we need to pay for the OFW ID! Is this the ‘best gift’ that Duterte has for us?” decried Fr. Herbert Fadriquela Jr, Chairperson of Migrante-Europe.

On 15 July, it was reported that Filipino migrant workers in the United Arab Emirates tried to apply for the OFW ID through the online iDOLE portal https://ofw.idole.ph/. They were surprised to find out that they were being charged PhP501 pesos plus PhP200 pesos for delivery fee (PhP700 is about €13).

OFW ID card (e-Card) 2002
Overseas Filipinos still recall that in May 2002, the POEA began to issue OFW e-Cards to Filipinos who went back home on vacation. The e-Cards can also be used as ATM cards in the Philippines. The then government of President Gloria Arroyo justified that the e-Cards will speed up the delivery of services and benefits to the OFWs. To get an e-Card, overseas Filipinos were encouraged to renew their payments for the OWWA membership and avail of the benefits immediately.

However, many believed that the e-Card was just one way of legitimizing the $25 OWWA membership fee, which has become mandatory for OFWs. This was despite the provisions of
Republic Act 8042 which clearly state that an OFW can opt not to be a member of the OWWA.

“We can do without a new OFW ID. We urge all member organizations of Migrante-Europe and other concerned migrant groups to reject the OFW ID and to join our call to end state exaction on overseas Filipinos!” Fr. Herbert concluded.