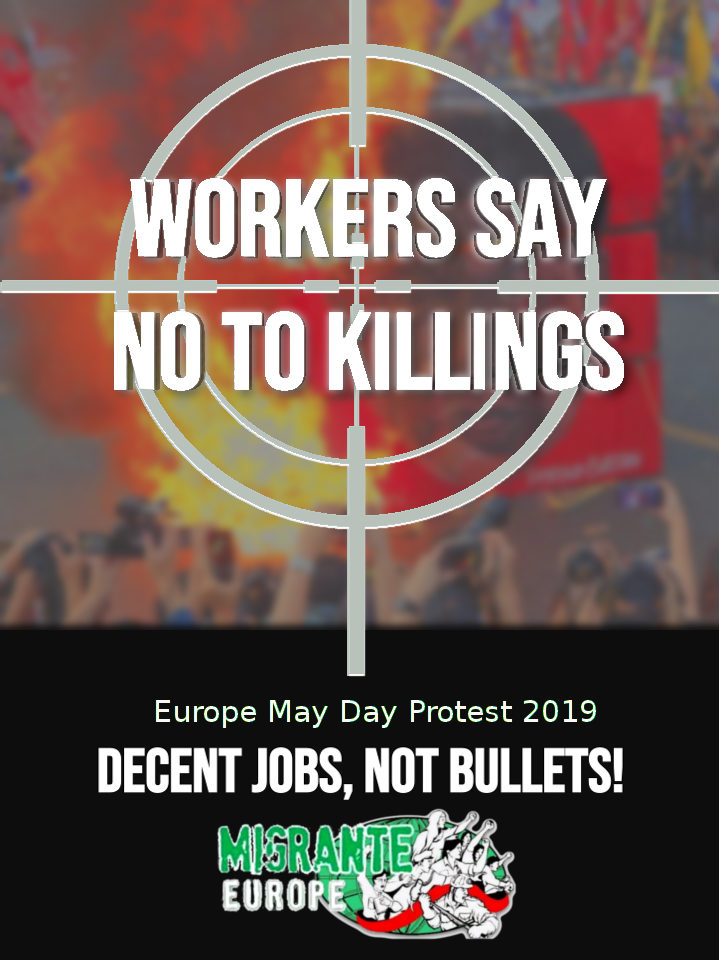 Today, Filipino migrants in Europe join the march of thousands of workers to condemn the inhumane condition and continued violence, harassment, and killings committed by the state forces against the workers and the Filipino people who strongly demand their basic human and labor rights and oppose the anti-people and anti-labor policies of the Philippine government.

According to the IBON Foundation, there are 5 million farm workers in the Philippines and 90% of them do not own the land they till. And they earn a measly US$2 a day. Farm workers were pushed to militant protests, as the government has remained deaf to their calls and grievances, among them a decent farm salary, improved living and working conditions.

Under the Duterte administration, incidents of workers who were in protests or dialogues to assert their labor rights were met with bullets, abductions, harassment, and threats.

Let us not forget the killing of 9 sugarcane workers in Hacienda Nene in Sagay City, Negros Occidental last October 2018.

The recent massacre of 14 farmers on the island of Negros last March was brutal and abominable.

Last year, the violent dispersal of NutriAsia workers who went on strike in Marilao, Bulacan was greatly condemned. Nineteen people, including NutriAsia employees and UP students had been detained.

The Kilusang Mayo Uno (KMU) in their letter to the labor commission of the United Nations stated: “trade union rights and civil liberties of Filipino workers and trade union activists are severely abused and violated under the Duterte administration.”

In Europe, Filipinos are greatly alarmed by the murderous drug war of President Duterte that has resulted in the mass murder of between 12,000 to 20,000 small-time and mostly poor drug addicts and supposed drug couriers. Most of them from urban poor families. The killing of Kian Delos Santos, a son of an OFW, caused national outrage. Last August 2018, Allan Rafael, a former OFW, emaciated by cancer and mistaken as a drug addict, was detained, beaten and tortured by the police and 4 days after the arrest and under police custody, he was declared dead.

The TRAIN Law is paralyzing the Filipino people with the high prices and skyrocketing costs of living conditions, while preventing the creation of job opportunities pushing more Filipinos to work abroad.

Filipino migrants are fed up with Duterte’s brutal dictatorship. Even the hope to put pro-people legislators in the Philippine legislature, has become farther from realization because since April 13 as the OAV started, disenfranchisement of many OFWs and migrant Filipinos globally has been documented to be rampant.

The elections have become a vicious circus and a scam and have been opening the eyes of many Filipinos that the parliamentary way cannot achieve genuine social change.

Europe Actions / Protest and Events on May Day

May 1 – Migrante Denmark will join the International Forum with South East Asia Group in a socio-cultural event in Copenhagen, Denmark.

The Ugnayang Pilipino sa Belgium (UPB) will join the mobilization/protest in Gent, Belgium. The mobilization will be participated by leading workers’ unions in Belgium such as the ABVV-FGTB, ACV-CSC, and other groups.

The Nagkakaisang Pilipino sa Pransya (NPSP) will join the solidarity groups in Paris in a rally/protest.

Migrante Austria will participate in a solidarity demonstration with different groups and unions in Vienna, Austria.

Migrante Chapters and members in Italy will join the mobilization with solidarity groups and worker’s unions.

The Migrante DenHaag will march with solidarity groups and labor unions in a rally/protest in Rotterdam, The Netherlands.

The Gabriela Germany will be joining the demonstration of Ver.di, Union for Services sector in collaboration with Fraeun Streik.

Migrante Europe supports in the call of the Filipino workers and the Kilusang Mayo Uno (KMU) for a legislated, across-the-board, P750 national minimum wage in the Philippines.

More protests and rallies to be led by Migrante members and chapters in Europe are expected to take place this month of May.