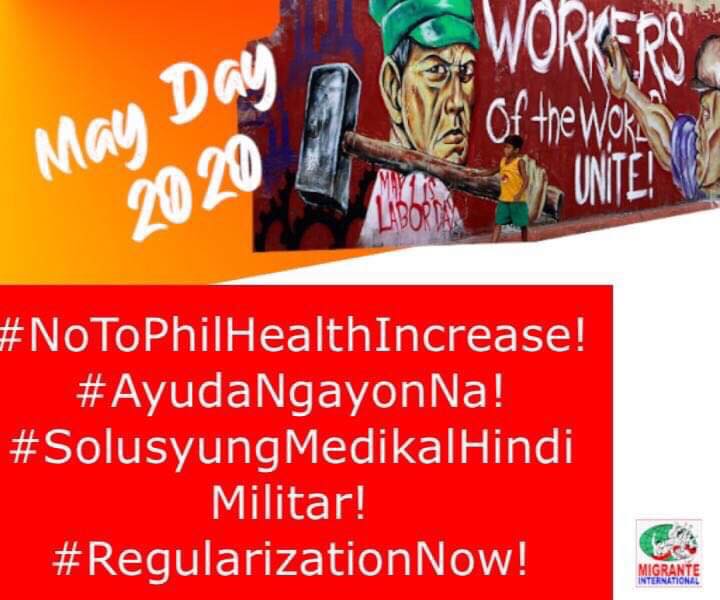 For today’s commemoration of International Labor Day, Migrante Europe joins the Global Kalampagan to hold President Duterte and his corrupt government accountable for the heartlessness and brutal response in this time of the pandemic.

We are outraged by the government’s failure and incapacity to address the emergency crises of Filipinos in the homefront and overseas. The Social Amelioration Program (SAP) and the Abot Kamay ang Pagtulong (AKAP) of DOLE failed to reach the broadest workers and their families. Abroad, thousands of Filipinos are now fed up with the delayed economic aid.

We are disgusted with the cruel, inhuman and degrading treatment of the government towards the Filipino people during lockdown particularly in Metro Manila and nearby cities. The returning and repatriated OFWs, both land and sea based were not spared from this inhumanity. They were forced to suffer unhealthy, unhygienic, and undignified conditions. Social distancing was completely violated.

How shameful is this government of Duterte! We are heroes before and today we are treated like rugs! Treating us like milking cows for 2 decades and abandoning us in today’s crises, the Philippine Health Insurance Corp. (PhiliHealth) reiterates the increase for OFW premium payments. Under PhilHealth Circular 2020-0014 dated April 02, 2020, the agency mandates OFWs whose monthly income ranges from P10,000 to P60,000 to pay 3.0%, an increase from 2.75% in 2019.

The Duterte government is against the poor and against the Filipino people. It was evident in his drug war and pro-China policy even during the time of the pandemic.

We laud the host countries of migrants and Filipino workers who are more responsive to the health crises. We strongly favored the Taiwanese government’s rejection of the Philippine government’s recent move to deport the Filipina worker in Taiwan who was critical of President Rodrigo Duterte. Mocha Uson should step down now as OWWA Deputy Administrator and other public officials who are a disgrace and betrays OFWs trust.

Enough of Duterte! Enough of his lies and deceit of change! Enough of his corrupt official’s abuse of power! Enough of violence and suppression of our legitimate rights! Enough of threats and red-tagging of OFWs and progressive groups particularly in Europe!

Filipinos in Europe and abroad, stand, resist, and unite for workers and OFWs!