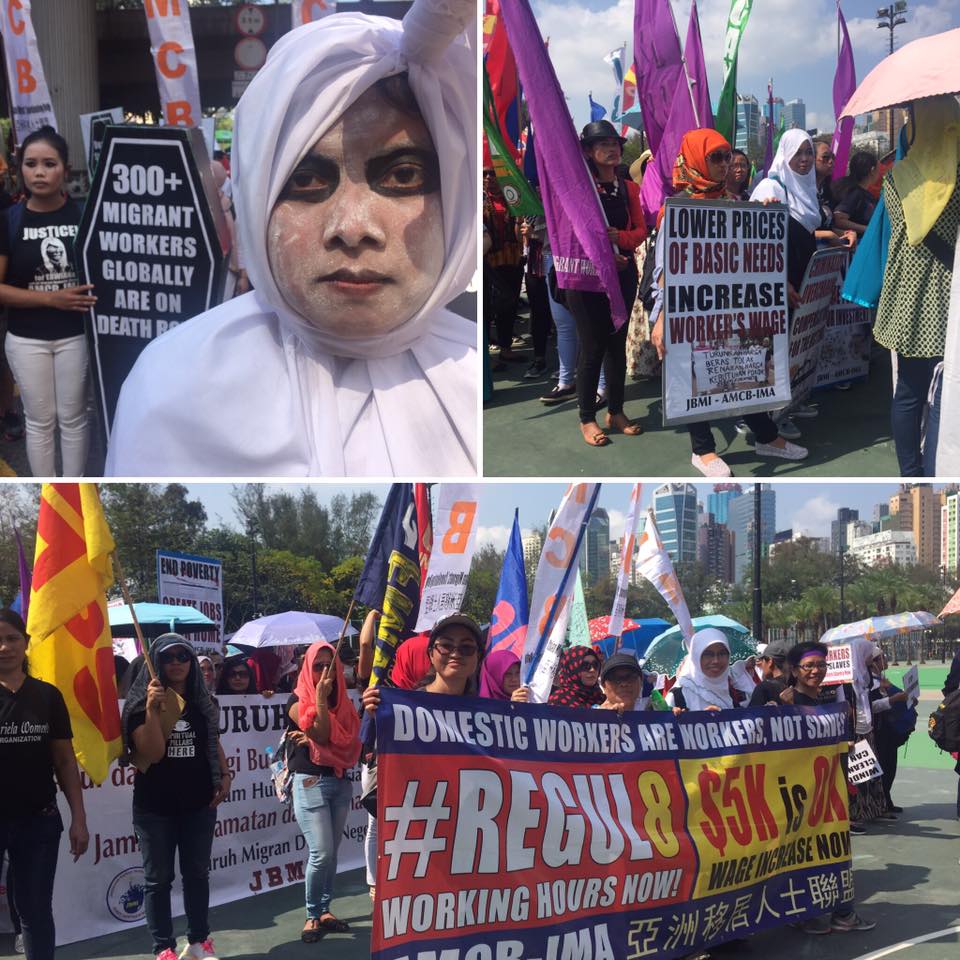 Yesterday, April 30, various Hong Kong-based Indonesian members of IMA went to submit their petition to Indonesian president Joko Widodo but were physically blocked, harassed and intimidated jointly by Hong Kong and Indonesian security forces. This high-handed response fortifies the notion of migrant workers as security concerns, instead of people with rights and entitled to social protection and dignity.

Migrants and refugees all over the world continue to be targets of attack as imperialist offensives heighten. Immigrants, migrant workers and refugees in the US, Europe and other developed countries are confronted with racism, chauvinism and hate crimes as right-wing governments take over, neofascism rises and oppressive policies are enacted. Anti-migrant hysteria is being fanned and migrant workers are targeted as scapegoats – practically endangering their lives. Government security through its police and military has been heightened as racial profiling becomes prevalent.

This smacks of the hypocrisy of governments mouthing safe, orderly and regular migration for all. Under the global neoliberal regime, both sending and receiving governments have already systematized the export of cheap and docile labor yet completely violating the rights of migrant workers through various anti-migrant legislation and practices. This they do as they continue to impose anti-worker policies like labor flexibility and contractualization, further assaulting the working people and contributing to increased global unemployment.

From the depression of wages to commodification of labor, from the outright denial of rights of workers to brutal dispersals of workers’ protests, from legislating repression to actual waging of wars, imperialism is putting migrant and local workers in the line of fire as it attempts to salvage itself from a worsening crisis that it itself has created.

While imperialist powers scuffle to have hegemonic control over and plunder oil and other resources of other nations, it worsens its own crises while intensifying the displacement and sufferings of the peoples of the world through militarism and war. The war-mongering Trump regime is now hell-bent in justifying a military onslaught on North Korea while continuing the war in Syria. Actions similar to this exacerbate the refugee crisis and the dislocation of peoples, including many children.

This environment of injustice builds in us the resolve to arouse, organize and mobilize our sector to collectively resist and struggle. We will mobilize in hundreds, in thousands, as we join our local working brothers and sisters in resisting the numerous neoliberal attacks on our jobs, wages, livelihood, and rights.

The formation of the International Migrants Alliance and the continuing growth and expansion of the global migrant movement are concrete expressions of the willingness and resolve of migrant workers, joined by refugees and displaced peoples, to continue and heighten the struggle for their rights, welfare and dignity.

We will continue to challenge this system that perpetuates the unequal and unjust treatment of marginalized peoples, especially migrant and local workers. We will not stop until we achieve a world without imperialist oppression, exploitation and war and where justice, peace and prosperity for all exist. #