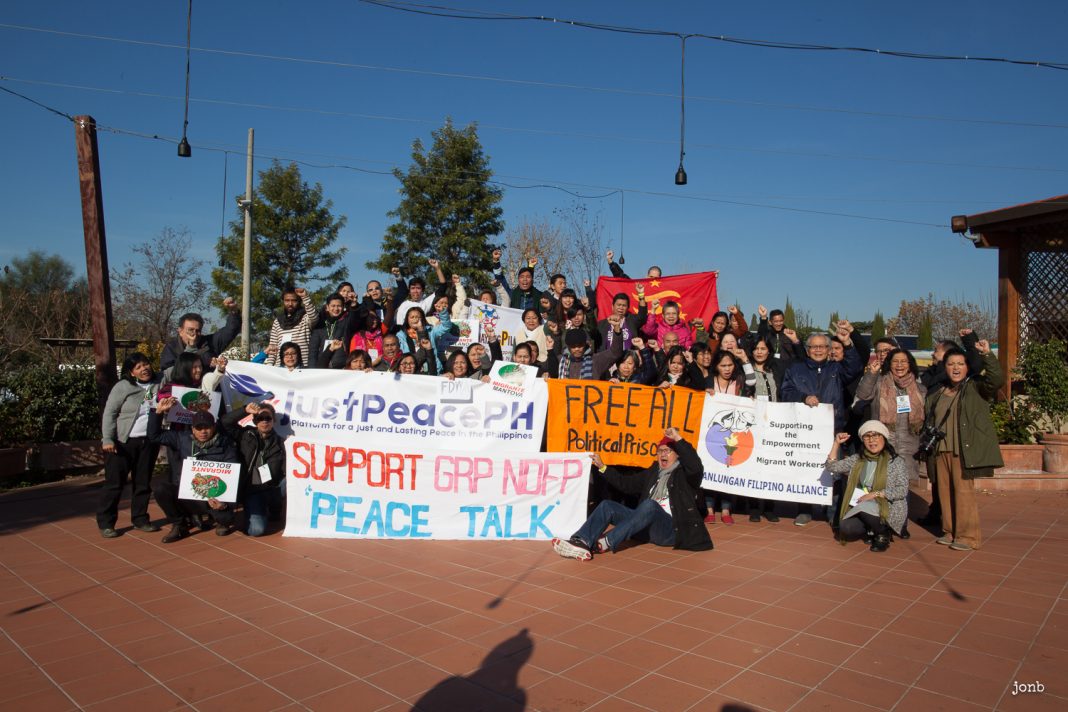 The recommendation of both panels of the Government of the Republic of the Philippines (GRP) and the National Democratic Front of the Philippines (NDFP) to their respective principals and the subsequent declaration of a ceasefire of the NDFP and the GRP on Christmas season is significant news to all peace loving people. This temporary silencing of guns of the warring parties fighting for more than a half century is a confidence building measure to resume the peace talks that was stalled for more than two years now.

For the land-based and the sea-based Filipino migrant workers, the resumption of peace talks between the GRP and the NDFP is a new hope that the New Year could bring to the Filipino people.

Migrante-Europe firmly believe that the continuation on the discussion of the Comprehensive Agreement on Socio-Economic Reforms will truly address the many issues, particularly landlessness and job opportunities and security of tenure, that pushed the thousands of Filipino workers to leave their family and community to work abroad everyday.

Land-based and sea-based Filipino migrants are like the shepherds in the nativity. They are set apart and separated away from their families, spending a long time away from home. The migrant workers have very important roles in the host country. They bring things and work on the things that the peoples of the world need. The financial remittances of the migrant workers to the home country are significant for the local economy to survive. Without the migrant workers, the global economy will not work. Unfortunately, while the Philippine government regards the migrants as “modern-day heroes”, they are treated as milking cows with the imposition of exorbitant fees and other state exaction fees. Today, there are growing numbers of migrant workers around the world that are victims of human trafficking, suffering from maltreatment of employers, detained in prison overseas and are crying out loud for support from the Philippine government.

Migrante-Europe fully supports the resumption of peace talks. We look at the peace negotiations as venue to comprehensively address the root causes of the armed conflict and lay the common ground to resolve the issues of landlessness, social injustices, economic poverty, forced migration among others confronting the majority of the Filipino people.

We call on the GRP and the NDFP to be faithful to the intents and purposes of its ceasefire declaration and to give peace a chance.

We appeal to the Filipino people in the home country and abroad to support the ceasefire between the GRP and the NDFP and to join the growing voices calling for the resumption of the peace negotiations.