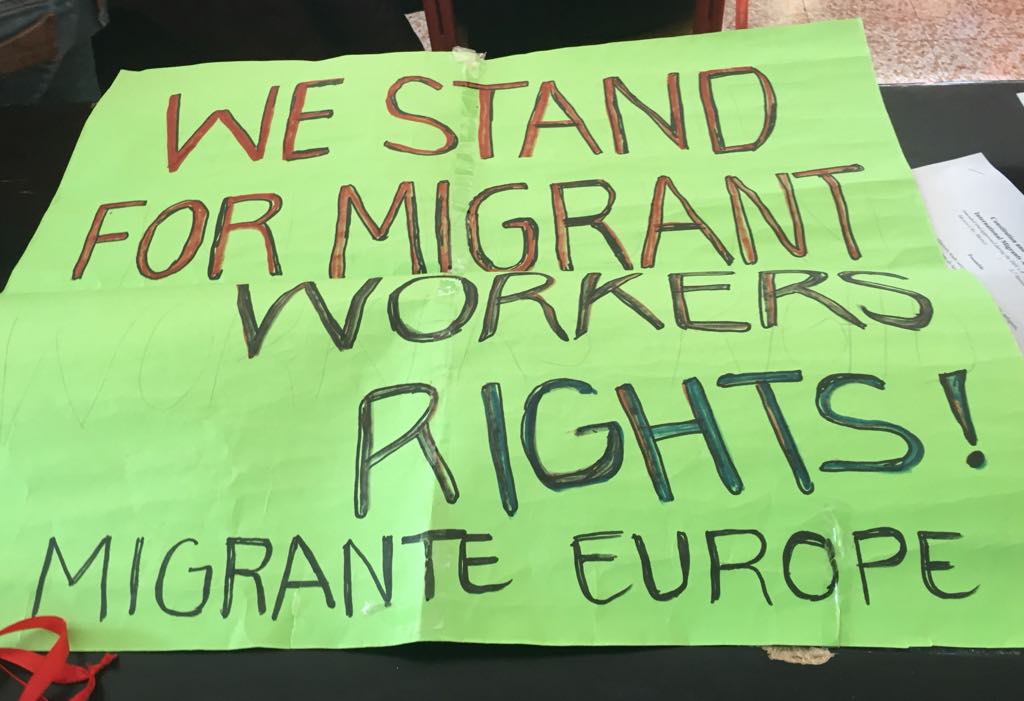 The cases of abuse and exploitation of Filipino migrants all over the world continues to increase, so we must be more resilient and more united in action.Joanna Concepcion, Chairperson of Migrante-International

As the global economic crisis boils up, the ruling powers are aggressively bolstering the oppressive social order that afflicts the majority of the masses as in the case with the recently concluded UK elections. Gary Martinez, a UK based migrant’s advocate lamented that “the year maybe changing, but the situation of migrants, refugees and other displaced people and their families are not changing because of stricter immigration laws not just  in the UK but in the rest of Europe.” Cora Espanto, the president of Migrante in The Hague and a survivor of modern-day-slavery agrees with that statement and adding that “Filipinos in diaspora must be united in standing up against anti-migrant rhetoric and policies not just in Europe but in the whole world.” Umangat-Migrante Rome chairperson, Enrelito del Carmen and Victor Salloman a member, continues to call for the regularization of irregular migrants in Europe.

Individuals and groups of people are further forced to leave their homes due to economic hardships, environmental degradation and/or armed conflicts to become migrants, refugees or displaced peoples.

Father Herbert Fadriquela, Chair of Migrante-Europe, says, “Land-based and sea-based Filipino migrants are like the shepherds in the nativity. They are set apart and separated away from their families, spending a long time away from home. The migrant workers have very important roles in the host country. They bring things and work on the things that the people of the world needs. The financial remittances of the migrant workers to the home country make the economy survived. Without the migrant workers, the global economy will not work. Unfortunately, while the Philippine government regards, the migrants as “modern-day heroes” they are treated as milking cows with the imposition of exorbitant fees other state exaction fees.”

In the Philippines, we find the puppet US-Duterte regime is finding pleasure in its harlotry with imperialist rivals China and the United States. Continuing plunder of our country’s resources and violation of our economic rights, the Filipino people, including those in diaspora in Europe, has build stronger unity with other oppressed people of the world to resist the imperialist aggression of the US and China. The impoverishment of the Filipino people is aggravated through various neoliberal schemes like the TRAIN law, state exactions on OFWs, contractualization, rice liberalization law, and the further institutionalization of the government’s labour export program through the impending creation of the Department of Overseas Filipinos.

Moving to quash the waxing outcry of resistance from Filipino migrants across Europe, the US-Duterte regime institutionalized Fascist tyranny through the formation of the National Task Force to End Local Communist Armed Conflict (NTF-ELCAC) in accordance with Executive Order 70. The Whole-of-Nation-Approach allows AFP and PNP to muster all government resources and institutions to impose state terror not only in the mother land but also where Filipinos reside in Europe. We have witnessed in Italy, The Netherlands, Germany, Sweden and other European countries how the NTF-ELCAC has wasted our remittances and our people’s taxes by recruiting “spies” amongst our ranks. We continue to remind the different Philippine embassies and consulates that they have the responsibility to help all Filipinos in need regardless of status.

Contributing to the global fight against fascism, nazism and neoliberalism as what we are seeing in the broad mass actions in France, Chile, Colombia, Bolivia, Haiti, Lebanon and in many other parts of the world is fundamental to our national democratic experience in the Philippines. The presence of organized Filipinos overseas plays a significant role in exposing the crimes of the US-Duterte regime before the international community. Only Duterte’s ouster and the complete overthrow of feudalism, bureaucrat capitalism and imperialism shall give deliverance to the Filipino people from perdition.

The International Migrants’ Day is the day when we glorify and honor our fellow Filipino migrants and their allies who claimed this day in 1997 as “The International Day of Solidarity for Migrants.” The UN recognition and designation of this day only happened in the year 2000. Member organizations of Migrante-Europe from Austria ; Belgium ; Denmark ; France ; Germany; Greece; Iceland; Ireland; Italy, The Netherlands, Norway; Russia; Spain; Sweden; Switzerland; United Kingdom; and many more will participate in different actions as part of its solidarity work with other migrant groups. Migrante-Europe salutes all progressive Filipinos in diaspora, our families and our allies in our strong resolve to build a strong movement not only in the Philippines but in the entire world.