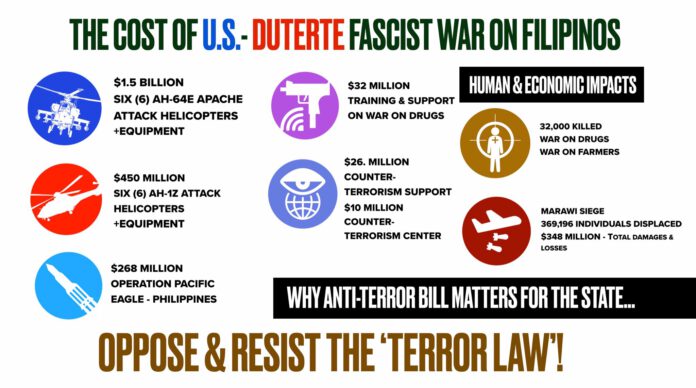 Filipinos are friendly by nature. We share our meal, our houses are open to visitors. We allow others to freely live in our lands.

Filipinos are not violent. Spilling is against our culture—much more so, against a fellow Filipino.

Filipinos are never greedy. We live within the day, within our means. We never hoard. We live with our land, by the labors of our hands, co-exist with nature.

This is us, this is our culture—we are Filipinos.

Colonizers, compradors, politicos and our fellow Filipinos—owned, sold, tricked, gambled and fooled us…

In the name of development—we are poor because we don’t do business, we don’t destroy our land, we don’t think profit; others said, we are lazy.

According to missionary records and sources: Filipinos are talented and intelligent.

The U.S. – Duterte fascist regime is selling us again, sending us to WAR among ourselves.

Sources from official U.S. military and embassy info releases, providing us accurate data related to military aid, loans, spending and planned purchases on military equipment, training and weaponry — in the name of ‘upgrading’ and counterterrorism.

The U.S. government strategically (for its own interests) is supporting the Philippine government desire to advance its military posturing—both at the expense of the U.S. citizens’ taxpayers money and the lives of Filipinos.

This graphic post presents actual figures spent, and approved for release. (see the info sources below)

The disconnect between the financial figures and our poverty rate is disheartening. At the height of the COVID crisis, the Duterte government is planning to purchase an almost $2 Billion dollar weaponry.

All the while, the U.S.-Duterte War on Drugs (and War on Farmers) plus the Marawi problem are all fueled by the U.S. – Duterte war machine.

The collateral damage of the brutal U.S.-Duterte Fascist Dictatorship has claimed: 32,000+ deaths of the deadly War on Drugs (War on Farmers); irreparable damages on the displaced lives due to the Marawi siege (369,195 individuals); and also those who are currently affected by the counter-insurgency attacks.

This Anti-Terror Law is part and parcel of the U.S.-Duterte fascist dictatorship, in their own words “The United States is a proud ally of the Philippines and will continue to provide whole-of-government support and assistance to Philippine counterterrorism efforts as we work together to address shared threats to the peace and security of both of our countries.”

The Anti-Terror Law spreads Duterte’s political power—domestic and foreign (posturing). Shielding him from criticisms and investigation/s.

The Anti-Terror Law matters most to the state forces (AFP/PNP), more money for violence-tainted power.

The Anti-Terror Law is important for lawmakers, more sources of support for protection, electioneering and corruption.

This Anti-Terror Law won’t speak of Peace, the U.S.-Duterte is discouraging this; “un-wanting” to address the social issues behind all the problems in our society.

For lawmakers, our freedom is expedient in exchange for loyalty to the mighty Duterte… 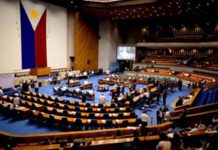