[Rome, 07 April] Migrante Europe today expressed optimism on the resolution of the roots of the armed conflict in the Philippines, after the 4th Round of formal peace talks between the National Democratic Front of the Philippines (NDFP) and the Government of the Republic of the Philippines (GRP) was concluded on an upbeat note on 6 April, in the seaside town of Noordwijk, in the Netherlands.

In a formal ceremony presided by the Royal Norwegian Government facilitator Elisabeth Slattum, both parties recognized that the document was a product of three “very difficult” days of negotiations.

Migrante Europe looks forward to the immediate formulation and approval of both Parties of the ceasefire’s guidelines and ground rules that shall govern the presence of armed units and elements of both Parties in local communities, and the creation of buffer zones to avoid armed confrontation. The guidelines and ground rules shall include agreement on what constitutes prohibited, hostile, and provocative acts. It will also provide for the creation of joint ceasefire monitoring committees and verification mechanisms to oversee the ceasefire’s implementation and handle complaints and alleged violations.

One of the major victories in the 4th Round is the firming up of the agreement of the two Parties on the free distribution of land as the basic principle of genuine agrarian reform. In the next round of talks, the Parties are planning to discuss and finalize the remaining items under Agrarian Reform and Rural Development, National Industrialization and Economic Development, Environmental Protection, and Rehabilitation and Compensation. They also agreed to accelerate the process of concluding the CASER which can be signed before the end of the year.

“We are hopeful that after the signing of the interim joint ceasefire agreement, more peace deals can be reached between the two parties despite the peace-spoiling by minions of US imperialism in the military establishment, the Armed Forces of the Philippines, and the Department of National Defense.” said Fr. Herbert Fadriquela, Migrante Europe Chairperson.

AFP all out war in civilian communities
Meanwhile, Migrante Europe condemned the spate of killings of leaders of people’s organizations and human rights defenders in the Philippines.

“It is alarming that despite the 4th Round of Peace talks in the Netherlands, aerial bombings and encampment of military troops in civilian communities continue in Mindoro, Agusan del Norte and Davao Oriental provinces.” said Father Herbert.

Just recently, armed  troops of the AFP occupied Barangay Baglay in Lagonglong, Misamis Oriental, as well as other villages in Abra, Marilog, Davao City, and Sultan Kudarat. Residents are being prevented from going to their agricultural lands or worse, are being forced to evacuate their communities for fear of military repression and killings.

Records from human rights group Karapatan show that, since February 2017, close to 50 peasants and members of indigenous peoples’ communities have
been killed by operating troops of the AFP. State security forces claim that the unarmed civilians are part of the NPA mass base.

“We urge President Digong to always ensure that the rights and welfare of every Filipino citizen are recognized, upheld and protected”, stressed Fr. Herbert. 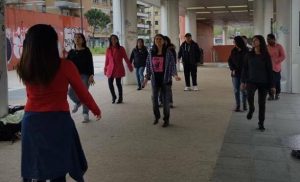 In Rome, concerned Filipinos and members of Umangat Migrante and Gabriela Rome Chapter danced “zumba for peace” last Sunday, in solidarity to the 4th round of peace talks. Filipino organizations and friends of the Filipino people in other cities of Europe also held photo opportunities and forums.

On Tuesday, 4 April 2017, Migrante den Haag organized a peace forum in the The Hague, participated in by their members and the Filipino communities in the Netherlands. 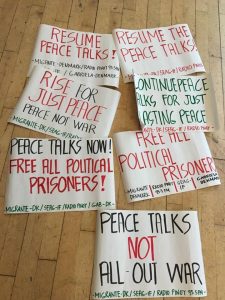 In Copenhagen, Denmark, a discussion group was also organized about the current peace talks. 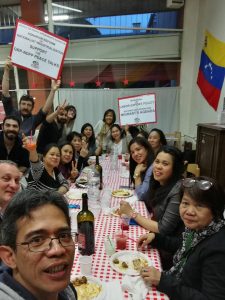 Migrante Milan organized a “Dinner for Peace” with Filipinos and Italians in support to the 4th Round of peace negotiations.

“We urge the Filipinos in Europe and around the globe to make a united stand to support the peace negotiations between the GRP and NDFP, and vigorously campaign for a just and lasting peace in the Philippines,” concluded Fr. Herbert.##