It is with utmost jubilance that we announce to all Filipinos and supporters here in the Philippines and around the world that the Indonesian government has suspended the implementation of the death sentence on our kababayan Mary Jane Veloso until all proceedings in the Philippines are finished.

We express our most heartfelt joyous solidarity with the Veloso family – Tatay Cesar and Nanay Celia, Christopher, Maritess, Darling and the rest of Mary Jane’s siblings, Michael, and most especially to Mac-Mac and Darren who have captured our hearts and further fortified our resolve to fight for Mary Jane’s life to the end. We feel your triumph because it is also ours. We rejoice with you. You have become every Filipino’s family, and Mary Jane every Filipino’s daughter, sister and mother.

We said that only the people can save Mary Jane. We fought the good fight, we would like to think the best fight that we could have ever waged, and because of this we have prevailed.

The whole Filipino nation and the world now cry tears of joy but, collectively, with peoples of other nationalities, we rage against the injustice done to Mary Jane. We will continue to fight for justice for Mary Jane, justice for all migrant workers and justice for the Filipino people.

The Filipino people still unite in the stance that Aquino and his government did too little, too late for Mary Jane. If not for national and international pressure and censure, Aquino would not have been compelled to take urgent action. Right to the end, Aquino had the gall to put on a stoic face and declare, when asked why his last-minute suggestion of turning Mary Jane into a witness against big drug rings came up just now, that “details of the case came into light only in the last few days” and that Mary Jane “did not cooperate at first.” Lies upon lies upon lies to the end, nothing could be farther from the truth. Because of government neglect and passivity, Aquino had placed Mary Jane on the brink of death.

Now, heads must roll. We condemn and hold accountable the Philippine Embassy in Jakarta, the Department of Foreign Affairs and Aquino himself for the sufferings of Mary Jane and her family. As we rejoice we continue to rage.

We now express grave concern for the lives of other Filipinos on death row and in jails abroad. How many more Mary Janes will suffer the same fate? The government has not shown transparency and accountability for failing to save the lives of Filipinos on death row. Mary Jane would have been the eighth Filipino executed abroad within Aquino’s term, the most number of executions under one regime since the Philippine labor export policy was implemented in the 1970s.

More importantly, we blame the Aquino government’s labor export policy for placing Mary Jane and millions of our migrant workers at risk and in grave danger.

Mary Jane was driven to desperation by extreme poverty, landlessness and enormous pressure as the caretaker of her children. She hailed from a poor family of sakadas (farm workers) in Hacienda Luisita. In her letters, she said so herself that she merely dreamed of a better future for her children and her family.

Mary Jane was forced to go abroad because the Aquino government had offered her nothing substantive and sustainable to address her family’s needs. Instead, what it had offered were programs that do nothing to address widespread unemployment and landlessness, the root causes of forced migration.

Mary Jane had been victimized by a trafficker, but Aquino’s labor export policy is the worst form of state-sponsored trafficking of Filipinos. In his five years in office, Aquino has indisputably become the “Trafficker-in-Chief” of migrant workers like Mary Jane.

Today, we celebrate the people’s victory by demanding a change to the very system that preyed on Mary Jane’s desperation and almost took her life. We come together for every Filipino’s life, honor and dignity. We do not want more Mary Janes to suffer because of the Aquino government’s failure and neglect.

Only Aquino’s ouster from office will give Mary Jane the justice she truly deserves.

(Photo taken during picket-delegation of Migrante Europe, Migrante-NL, Migrante Den Haag and the International Coalition for Human Rights in the Philippines at the Philippine embassy in The Hague, The Netherlands, today 29 April 2015. Photo by Consie Lozano) 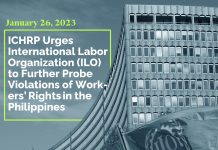 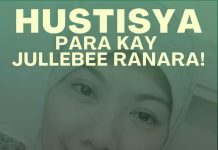 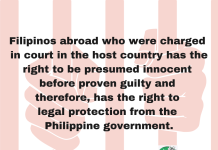