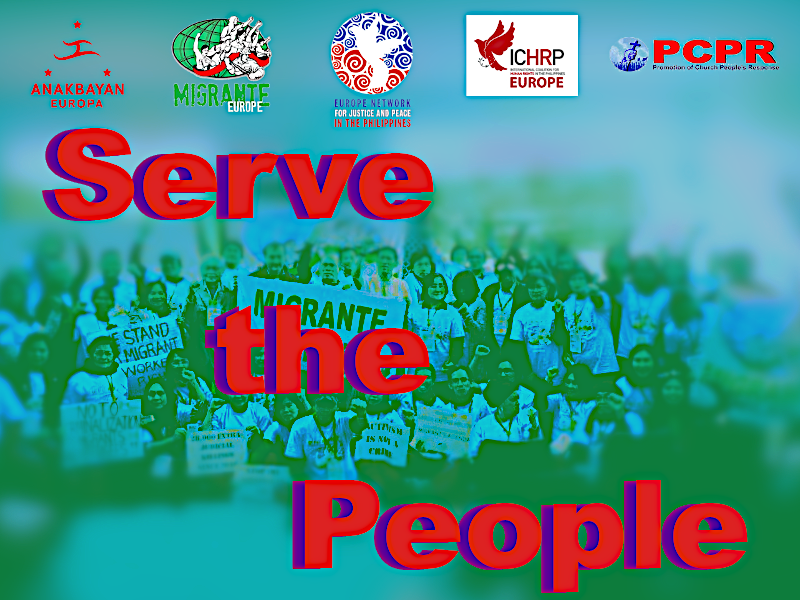 Migrante Europe, Gabriela-Europe, PCPR-Europe and other cause-oriented groups based in Europe have been organizing relief assistance campaigns for the thousand of families affected by Typhoon Rolly in the Bicol region and of the Typhoon Ulysses in Luzon; as a collective act of solidarity for fellow Filipinos. But recently, these groups being included in the list of ‘reg-tagged’ organizations from NTF-ELCAC are receiving negative reactions due to the black propaganda peddled by the NTF-ELCAC, military social media posts and even by the personal facebook account of Lorraine Marie T. Badoy herself.

The damaging impacts by Typhoon Rolly and Typhoon Ulysses call for massive aid response from civil society organizations as counter to the glaring ineptness of the Duterte government on disaster response. There is no place for red-tagging in this season of disasters, instead our government must find ways to integrally address the plight of more than a million families displaced by the typhoons and flooding.

Migrante Europe, Gabriela-Europe, PCPR-Europe and other Europe-based mass organizations are consistent with their social initiatives even during the height of the COVID-19 pandemic in Europe; providing food aid, and psycho-social assistance to migrant Filipinos affected during the lockdown in European cities.

The Duterte government has no right to stop us from conducting our relief assistance to our fellow Filipinos in need of immediate help as they face homelessness and hunger brought about by the recent disasters.

Likewise, we demand accountability from our national government for failing in disaster preparedness, tolerating projected damages on people’s lives in many events of natural calamities. The government response should be ‘beyond resilience’, our Filipino people have suffered long enough from the gross negligence of our government officials, from the President down to the local officials!

The ancillary causes of the damaging impacts of the typhoons are ecological destruction of our forests and mountains areas (from mining and logging); the release of water from the dams; the absence of zoning policies; the clogging of our creeks and sewerage systems. Our government continues to fail us.

But, we still commit to help our affected countrymen. We continue sending our contributions and assistance, even by the continued intimidation of the NTF-ELCAC. We will keep serving the people.

We are urging our Congress then, to defund the NTF-ELCAC, that this government agency masquerading of helping our government is engaged in costly militarization of the rural communities and of character assassinations of party-list representatives, activists, church-people and local leaders. The agency’s Php 19-billion proposed budget should not be approved, but instead channel this budget for relief and rehabilitation.