The newly-formed alliance of Filipino migrants, Migrante Europe, has asked the Duterte government to bring Christmas cheers to stranded OFWs and political prisoners by reuniting them with their families.

“We appeal to President Duterte to do everything he can to bring home many stranded OFWs especially those in the Middle East and, at the same time, for humane considerations, release all political prisoners in the Philippines,” urged Ann Brusola, newly-elected Secretary General of Migrante Europe and a long-time OFW in this city.

She said this would be the most meaningful gift of President Duterte to the stranded OFWs, political prisoners, and their families.

About 2,000 OFWs remain stranded in the Middle East because they don’t have travel documents and funds. Most of them have suffered abuse at the hands of labor recruiters and their employers. Many OFWs are also unjustly languishing in foreign prisons because they have not been provided legal assistance by the Manila government, Brusola explained.

She said political prisoners are also in the same situation – unjustly accused, imprisoned and separated from their families. They should be reunited with their families this Christmas, she added.

Brusola also said undocumented OFWs are in a way also stranded because they can´t return home. She said the plight of undocumented OFWs and those needing legal assistance, including victims of human trafficking, will be among the major campaigns of Migrante Europe in the next three years. 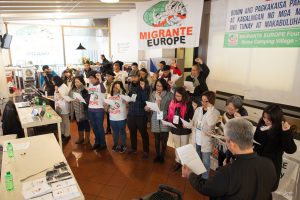 The alliance also approved yesterday its Constitution and By-Laws and is expected to finish its assembly today by approving its Program of Action. A solidarity evening will follow and tomorrow, December 12, delegates will proceed to the Philippine embassy to present their demands to the Philippine government. #