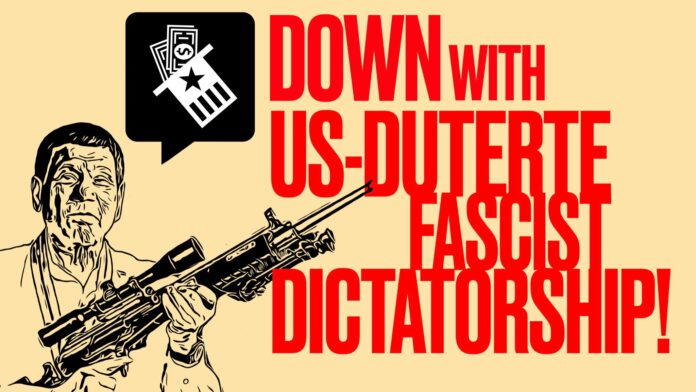 The recent pronouncement of the Secretary of the Department of Foreign Affairs last June 2, 2020 on the suspension of the planned termination of the Visiting Forces Agreement (VFA) between the Philippine government and the government of the United States (an agreement allowing the U.S. military to conduct  joint exercises and operations in the Philippines) exhibited the continuing puppetry of the US-Duterte fascist regime.

This is not a complete turn-around of the Duterte pronouncement last January 21, 2020, when he directly spoke of terminating the Visiting Forces Agreement (VFA) with the United States, but rather just part of a melodramatic propaganda of Duterte.

The US-Duterte fascist regime continues to bring a damaging anti-poor atmosphere of governance, notwithstanding the continuing violence inflicted by the military-nature of the Visiting Forces Agreement (VFA), influencing strategies for war. Remember the destructive Marawi siege? The continuing ‘counter-insurgency’ campaigns displacing communities in the hinterlands? The non-interest and non-committal of the Duterte government in the pursuance of the peace process between the GRP and the NDFP?

The U.S.-Duterte fascist regime cooperates in the ruthless war-on-drugs and war-on-farmers through the military modernization program, enabling the 35,000 deaths in the Philippines—still death under investigation (DUI). In 2016, the U.S. government helped kickstart the launching of the Duterte war-on-drugs by committing the $32 Million support for training and services.

The US-Duterte fascist regime allows the continued killings of journalists, activists and ordinary Filipinos. Surprisingly, the state forces (AFP/PNP) remains muted in the number of deaths; with information linking themselves with the unending executions.

This US-Duterte fascist regime enflames the alarming human rights situation in the Philippines with blood money from the United States though military support. The Operation Pacific Eagle-Philippines was supported by a $108.2 million in the year 2019, receiving an approximately $268 million in total military financing and procurement from the US Government from 2016 to 2019. One of the many reasons why the AFP-PNP remains strongly committed to protect the US-Duterte regime.

The US-Duterte fascist regime dictates the power-play games in the West Philippine Sea issue, at the cost of the sovereignty of the Philippine republic.

The US-Duterte fascist regime agrees in a costly $2 billion military arms deal ($1.5 billion for six (6) AH-64E Apache attack helicopters and related equipment and $450 million for six (6) AH-1Z attack helicopters and related equipment) with the government of the United States, at the height of the coronavirus pandemic; not prioritizing the integral health response of the crisis in the country.

The ultimate logic of the smooth passage of the Anti-Terrorism Law in Congress is to curtail any resistance on the vested interests of the US-Duterte fascist regime. Read our statement.

Europe Network for Justice and Peace in the Philippines

International Coalition for Human Rights in the Philippines – EUROPE