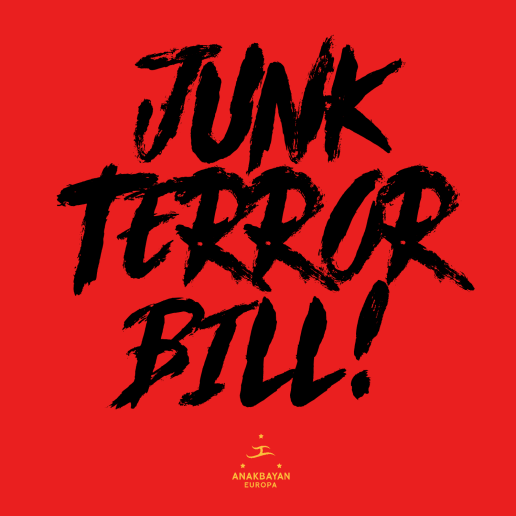 Ugnayang Pilipino sa Belgium (UPB) and all its allied organizations and individuals vehemently condemn the desperate attempt of the US-Duterte regime to strangle further on the nation’s freedom and democracy. UPB strongly opposes the passage of House Bill No. 687 or Senate Bill No. 1083, also known as the Anti-Terror Act of 2020 amending the Human Security Act of 2007.

Firstly, the Anti-Terror Bill is much worse than the Human Security Act (HSA) of 2007 as it is a wholesale attack on the constitutional provisions of due process and blatant usurpation of judicial powers. In its provision is the creation of an Anti-Terror Council (ATC) which has the power to designate by mere probable cause, persons or entities as “terrorists” or “terrorist groups” without the need of any judicial warrant of arrests. The same ATC via the Anti-Money Laundering Council can freeze assets of mere suspects without any opportunity to defend themselves.

Worse, is that it would be prone to impunity by despotic governments. It has no provisions for checks and balance as it took away the stiff penalties against detention of suspects and the conduct of extra-judicial killings.

While the rise of the Philippines’ Duterte Regime coincides with records of mass killings over the past 4 years with wanton display of mass murders, of bloodied bodies all over community streets and corners, mass incarcerations, aggressive community surveillance, the weakening of civil liberties and tortures, these were not reported as state violations against human rights. Local news stories say these slaughters are part of the contemporary crusade to liberate society from the moral panics on drug addiction, and Islamic and communistic terrorism. With this rationale in Duterte’s flagship program, forces of the military, the police and the para-military attack civilians in their own homes, creating fear, danger and destruction incomprehensible to normal people. But the Duterte government justifies these episodes as due to criminal activities with possession of firearms and who resisted arrests. Military, police and paramilitary deployment were justified to fight against perceived drug traffickers, and Islamic and communistic terrorists without necessarily having been proven in court as such. Over the years of this administration was never any rule of law.

Fifty thousand (50,000) incentivized policemen were regularly scattered all over a city like Metro Manila or Cebu City, just as 7 battalions of soldiers were deployed in Negros Island to implement Executive Order No.70 and Memorandum Order No. 32 and that resulted to mass killing of Negros farmers in 2019.

For 4 years now starting mid-2016, the state engaged in a pattern of bone chilling episodes of dawn break-ins by 40 to 50 armed state forces into homes of sleeping community folks, killing them in their abodes, constant shootouts in small and congested urban poor communities, mobile checkpoints, mass murder of peasants in communal farming, if not a murder of a bus or a tricycle passenger, a murder of a priest, lawyer, teacher, local government councilor and other professionals.

This is terrorism by the state. This is what shatters the human spirits. All these incidents send shocks to the collective imagination, it attack the mind of ordinary Filipino folks to voluntarily submit to a system of social control by the Duterte regime.

Based on these, what therefore is atrocious is how Duterte’s government violently handled the intent to curb criminality in the country rather than how criminality created havoc into the lives of citizens in Philippine society. And with the passage of the “Anti-Terror Bill” we expect a permanent killing or soaking of blood in our communities.

In short, SB 1083 or the Anti-Terror Bill of 2020 is an authorization for Duterte regime’s mandate to pursue further state-organized-crimes in the Philippines.

ACTIVISM IS NOT A CRIME!

DOWN WITH STATE FASCISM!

NO TO THE ANTI-TERROR BILL!

NO TO MARTIAL LAW!