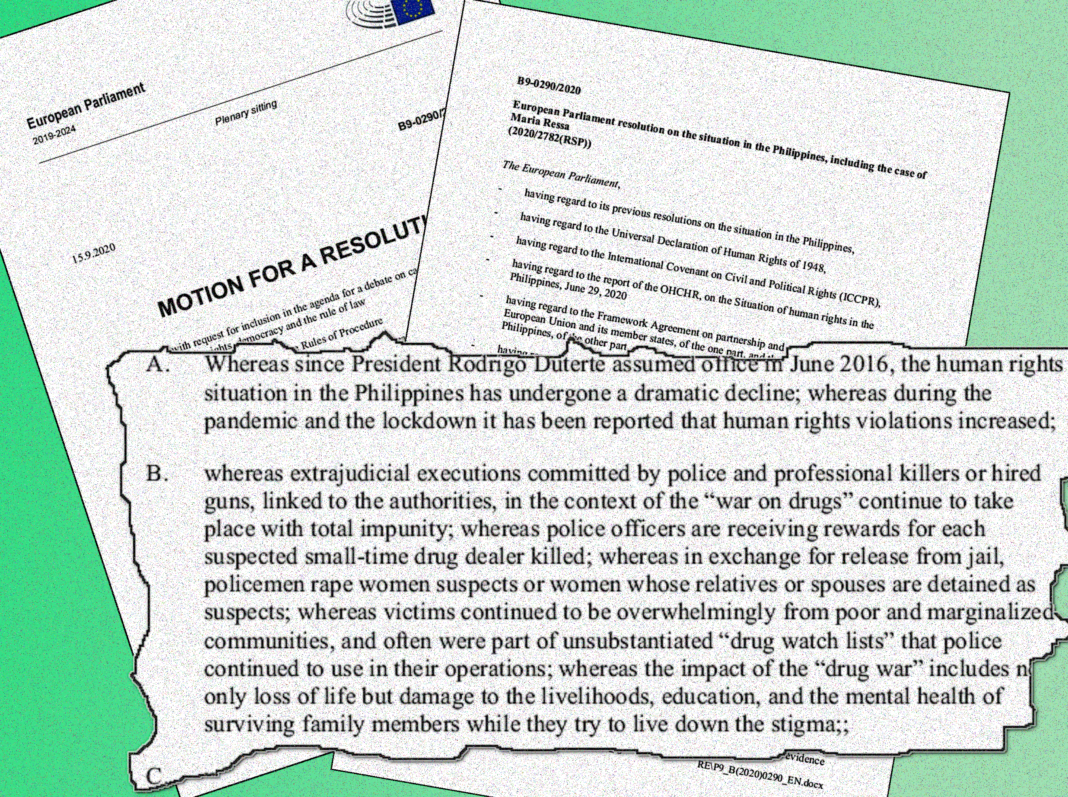 The European Parliament resolution clearly affirmed the continuing solidarity and condemnations calls of our network against the Duterte administration related to human rights abuses, bloody drug-related and activists killings, the gross intimidation of media and journalists, the signing of the anti-terror law, relentless military attacks in the mountain areas, and the alarming corruption of Duterte-appointed officials.

• The extrajudicial killings and human rights violations related to ‘war-on-drugs’ and calling the government to disband private and state-backed paramilitary groups ; and address the drug-problem as a health issue, stating “that the fight against illicit drugs must be pursued in full compliance with due process of law, in accordance with national and international law, and with emphasis on public health…”
• The systemic character and violent assassinations of human rights and environmental activists, trade unionists and journalists as a way to silence critical and fearless voices in the country.
• The direct act of killing of notable activists and human rights defenders: Jory Porquia, Randall ‘Randy’ Echanis and Zara Alvarez.
• The end of violence against women and LBTQI people, clearly identifying the repeated misogynist and sexist statements of Rodrigo Duterte—all constituting a direct act of serious violation of their human rights and dignity.
• The alarming levels of corruption of the Duterte regime.
• The opportunist use of the COVID pandemic “as a pretext to limit democratic and civic space, fundamental freedoms, and the respect of the rule of law.”

On the other hand, the resolution failed to mention the militarist-induced appointments of former generals and police officers in the Cabinet and other key government offices. Such appointments are enablers of the violence-tainted governance of the Duterte regime, fomenting more human rights abuses.

As the resolution cited recent cases, specifically those of the martyred activists (Zara Alvarez, Randall Echanis and Jorry Porquia); it should not also fail to mention the inability of our Congress and the Supreme Court of their mandate to condemn the glaring acts of the desecration of human rights and dignity of Filipinos.

The European Parliament resolution assured us of their constant monitoring; giving us hope to continue denouncing the despotic President Rodrigo Roa Duterte. Likewise, our continued vigilance, protests and fora; allowing even representatives from the international bodies, from the UN and among the members of the European Parliament are positively amplifying our calls from the ground—from the END of State Terrorism, thru Justice for All, and ultimately OUST Duterte.