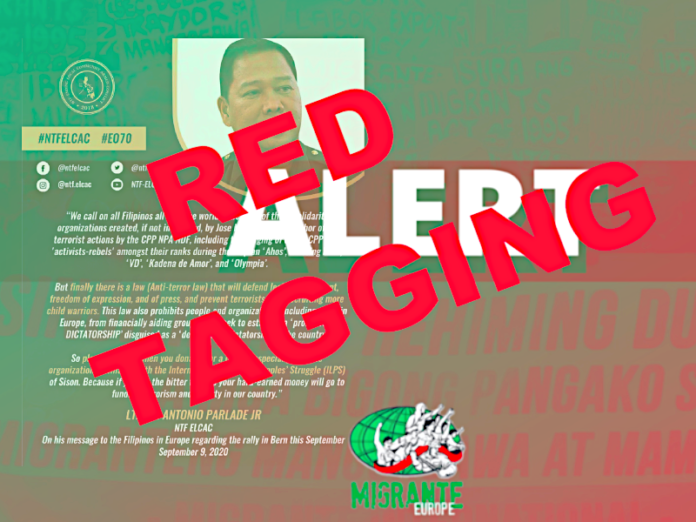 Migrante-Europe and allied organizations condemn in the highest form the attack of General Parlade against Anakbayan-Europe.

General Antonio Parlade’s irresponsible statement of accusing Anakbayan as front of the CPP NPA NDF which according to him is responsible for the death of thousands of Filipino youth is baseless! His statement is a failed try to cover-up the more than 30,000 lives that fell victim by his president’s war on drugs and against activists, members and leaders of peoples’ organizations, human rights defenders.

General Parlade’s boast of the Anti-Terror Law as an effective tool to combat the CPP NPA NDF belies the claim of President Duterte and his minions that the government is winning the hearts and minds of the people in its armed anti-insurgency campaign. Despite the claims of success of its military campaign against the CPP NPA NDF, the increasing military budget and the rushed enactment of the Anti-Terror Law of 2020 of the government prove otherwise. The truth is, the militarist approach has bleed the nation its resources. Every year, billions of pesos are allocated to military personnel and equipment, but most of the chunk of the fund only end up into the pockets of corrupt officials. The rampant fake surrender-scheme of the government has become an income generating projects of the officials of the Armed Forces of the Philippines and the Philippine National Police.

Migrante-Europe and its allied organizations believe that the militarist approach only results to various forms of human rights violations such as: illegal searches and raids of homes of activists and offices of people’s organizations; arbitrary arrests; and extrajudicial killings with common justification from the police military that the subjects of the arrest “fought back” and massacres of civilians. The fascist hands of Duterte and its minions are guilty of the murders of Jory Porqia, Carlito Badion, Randall Enchanis, Zara Alvarez to name a few.

General Parlade and the National Task Force to End Local Communist Armed Conflict must be reminded that brutal and ruthless response from the government to the people defending their rights to life, land and livelihood highlights its cruelty to people at home and abroad demanding public accountability of Duterte and are struggling for justice, peace and social transformation. Migrante-Europe and its allied organizations believe that;

State repression and killings will never be an answer to farmers demanding genuine agrarian reform;

State repression and killings will never be an answer to workers struggling for just wage and security of tenure;

State repression and killings will never be an answer to indigenous peoples communities struggling for self-determined development of their communities;

State repression and killings will never be an answer to urban poor communities longing for decent housing and social services;

State repression and killings will never be an answer to the 10 million overseas Filipinos in diaspora , longing for their families and the motherland that is now struggling to the repercussions on their jobs and well being by the Covid-19 pandemic.

Migrante-Europe and its allied organizations believe on the noble cause of Anakbayan-Europe of serving the poor, deprived and oppressed sectors of the Philippine society

Migrante-Europe and its allied organizations call on all Filipino communities in Europe and around the world to denounce the anti-poor policy and reject the Anti-Terror Law of President Duterte.

Migrante-Europe and its allied organizations affirm our commitment to continue to struggle with the economically and politically marginalized sectors of Philippine society and around the world.