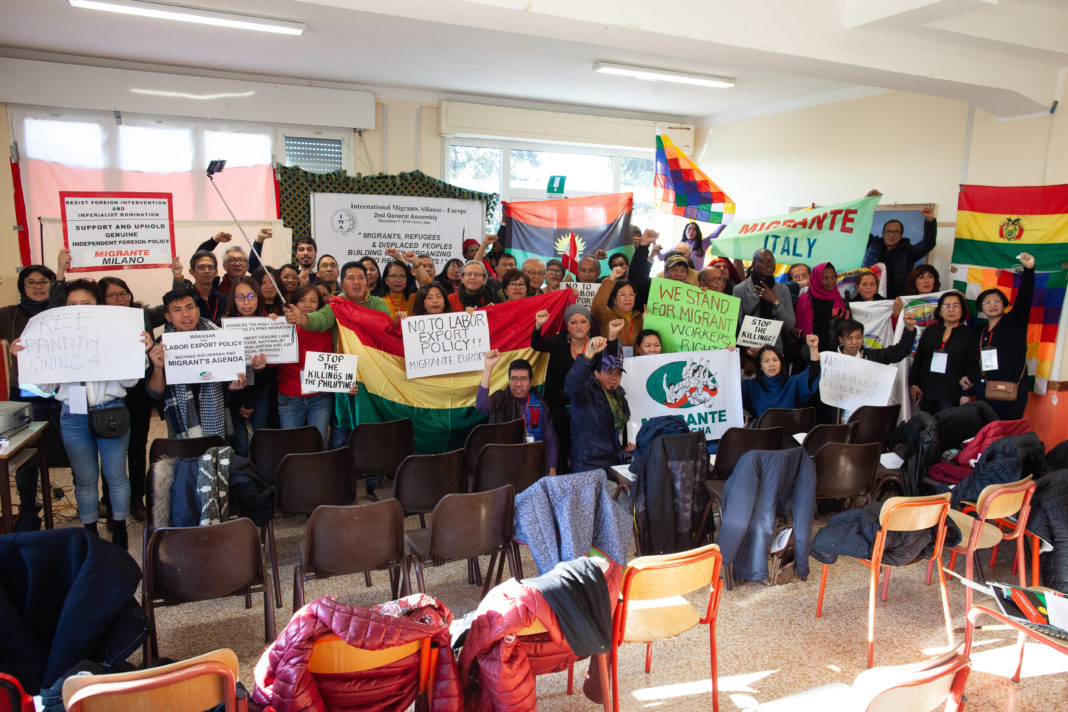 The International Migrants Alliance (IMA)-Europe held a successful 2nd congress on 07 December 2019 in Como, Italy. With the theme of “Migrants, Refugees and Displaced Peoples Building Unity, Organizing to Reclaim Rights”, the congress was attended by over 100 participants representing 31 grassroots organizations and migrants, refugees and displaced peoples from Asia, Africa, and Latin America.

Don Giusto Della Valle, Rector of the Parrocchia San Martino di Rebbio welcomed the congress delegates to his parish, known in the area for its work with displaced migrants and refugees.  “We are builders of peace. But what kind of society do we want to build in Italy? How are we going to build it if we do not allow people to stay and allow them to contribute to this project? We need to support migrants because local legislation is becoming more and more unfriendly towards them.”

Bishop Antonio Ablon of the Philippine Independent Church (IFI) and representing the European Network for Justice and Peace in the Philippines (ENJPP) stressed how the worsening economic and human rights crisis in the Philippines continues to drive 7,000 Filipinos out of the country everyday. He further stressed the role of the diaspora in the project of social and national liberation in their countries of origin.

Fabio Cani of Como Senza Frontiere said that we have to narrate migrant stories as testimonies of unjust global structural problems.  Pietro Bassi, Professor of Sociology and Director of the Masteral Course in Immigration at the University of Venice, warned of a ‘war’ against migrants and immigrants being waged by Europe. ‘It seems Europe does not want migrant workers. But in fact, they contribute 10% to the receiving country’s GDP.  They want migrants but if possible on their knees, naked and without expectations or irregular – that is, irregularized, with no rights and clandestine.’

As a sign of their growing commitment to strengthen their unity across Europe, the assembly welcomed 20 new members to the regional alliance. The general program of action approved by the assembly aims to grow the alliance in the next 3 years to provide an effective network that will bring the voices of migrants, refugees and displaced peoples in all arenas of advocacy – from the local to the regional – for the purpose of organizing to reclaim their rights!