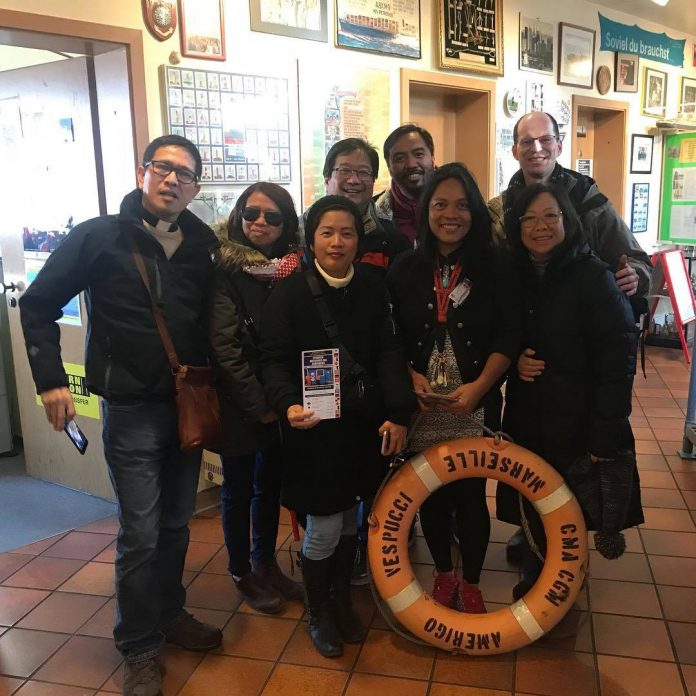 On 10-11 February, the Executive Committee of Migrante Europe held a highly successful meeting in Hamburg. The meeting addressed organizational matters to strengthen and further the work of the alliance in the region. Meetings with partners from the local Filipino community and various churches and their missions in Germany grounded and further enriched the discussions and the work of Migrante in the reality of migrants’ and seafarers’ lives.

On Friday night, 9 February, the Lutheran Church Mission & Ecumenical Center in Hamburg hosted a panel discussion about the plights and issues of Filipino migrants in Europe and the current national situation in the Philippines. Participants came from the Federation of Filipino Organizations in North Germany (FFONG), congregations of the Roman Catholic Church in Hamburg and Kiel, Word International Ministry – Hamburg, Iglesia Filipina Independiente (IFI – Philippine Independent Church), German Seafarers’ Mission, Evangelical Missions Work, and overseas Filipinos from Itzehoe and Rissen, among
others.

The speakers pointed out that despite the Philippines being extremely rich in natural resources, Filipinos are forced to leave the country due to poverty, lack of gainful employment and landlessness. More than 4,000 leave the Philippines every day. Speakers shared similar stories of extreme exploitation, physical and mental abuse that Filipino migrants suffer whilst working abroad. The discussion also highlighted that millions of families are suffering from the so-called “social costs of forced migration,” with children growing up without the presence of one or both parents.

Migrante Europe speakers also shared how grassroots migrant organizations like Migrante have been established in order to fight for the rights and welfare of their compatriots in the host countries. Moreover, migrant organizations help push for genuine social change in the Philippines so that families are not torn apart because of the need to survive.

The night was capped by cultural performances of Grupong Tulay, which rendered the song Inay (Mother); a young Fil-German violinist who played a piece by J.S. Bach; and a showband which played original Filipino pop hits.

Pr. Matthias explained that over 250,000 seafarers visit the shores of Hamburg every year, from ocean-going tankers, containers and cruise ships. Of this number, more than 100,000 are Filipino seafarers. Most of them are only allowed a few hours before they need to set sail again, right after docking in the ports of Hamburg after a number of months at sea. The seafarers’ club provides a variety of services ranging from practical help and orientation, a safe place for quiet reading and prayer, respite and recreation.

Pr. Matthias added that Filipino seafarers receive very little orientation and support from the Manila government. They are marketed to shipping companies as cheap and docile labor, and left to fend for themselves, if not for the assistance of seafarers’ missions such as those in Hamburg and the International Transport Workers Federation (ITF).

On 11 February, ME Chair Fr. Herbert Fadriquela, Jr met with the Filipino Roman Catholic
community in Hamburg. They discussed pressing issues and concerns affecting them in Germany, as well as in the homeland.

The struggles faced by Filipinas married to Germans, ranging from socio-cultural differences to domestic violence, was a particular issue raised in the meeting. The issue was said to be quite prevalent in the local community with most of the women suffering in silence.

The Execom announced that the Regional Council of Migrante Europe will meet on 14-15 July 2018 in Belgium.