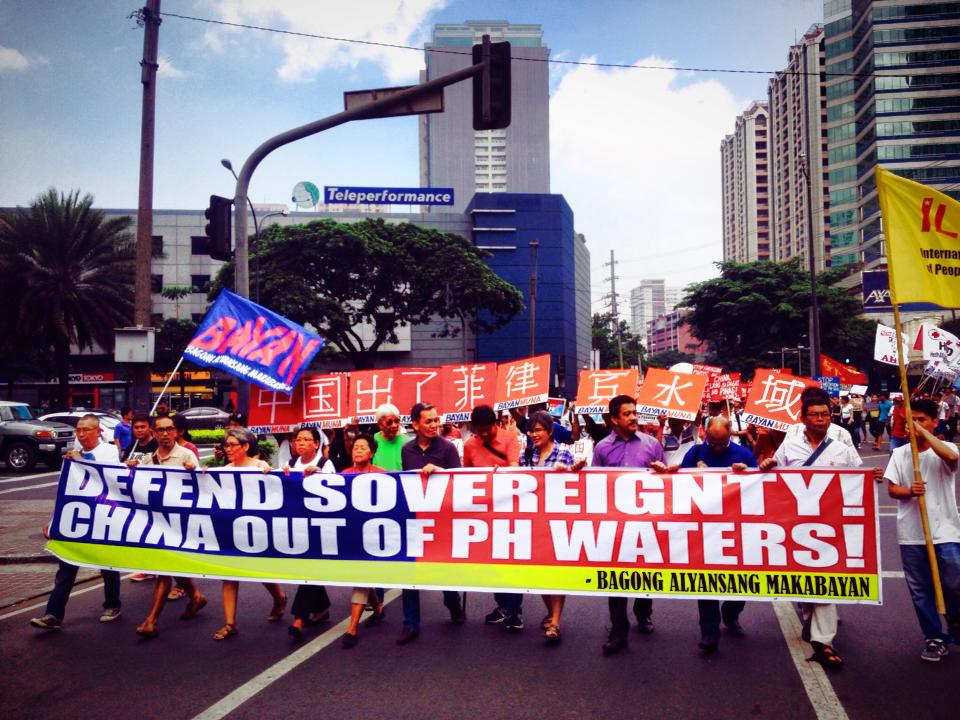 On the occasion of June 12, Bayan calls on the Filipino people to stand in defense of national sovereignty and territorial integrity against the foreign powers that seek to tear the Philippines apart. Today we are reminded that the Philippines is not truly free.

We denounce in the strongest terms the aggressive actions and incursions of China in the West Philippine Sea, in blatant violation of the UNCLOS. China’s imperialist agenda is behind the grabbing of our seas and islands. We vow to resist such actions and call on the people to fight back through the various political and diplomatic means available to us.

We likewise reject the increasing US intervention in the maritime dispute with China. The US cares not for Philippine sovereignty and territorial claims and is merely concerned with freedom of navigation in international waters. The US is more interested in reestablishing is bases and increasing its troop presence in the Philippines as part of its pivot to Asia. Decades of US military presence in our country has brought us never-ending woes and has severely and shamefully undermined our sovereignty.

Both the US and China connive to exploit the Philippine economy, including our workforce and our natural resources. Both have economic interests in the Philippines. Both stand to gain from the ongoing efforts to change the economic provisions of the PH Constitution.

We will not be caught in the claws of the Dragon nor the Eagle. We stand for a truly free, independent and self-reliant Philippines. We stand for an independent foreign policy based on our national interest and respect for our sovereignty.

We assail the puppetry of the Aquino regime who up to now has no strategic plan for developing the domestic economy and our capacity for external defense. As with the economy and everything else, Aquino relies on foreign interests to boost our external defense vs China. This is precisely what keeps us weak. Aquino has failed to lay the foundation for an effective external defense not reliant and dictated on by the US.

We are not helpless in the face of the big powers. Our people are our greatest strength. A patriotic movement is now developing to counter China’s incursions and US intervention.

In the coming days we vow to:

1.       Continue holding protest actions against the imperialist designs of the US and China.

2.       Conduct a wide-scale education campaign on the matter of Philippine sovereignty and territorial integrity and mobilize the people for their defense

3.       Press the Philippine government to undertake the necessary steps to defend Philippine sovereignty in our waters and islands while rejecting one-sided pacts such as the US EDCA

4.       Press the PH government to nationalize the industries and enterprises of the countries that commit hostile acts against the Philippines

5.       Fight for national industrialization and genuine agrarian reform as the main requisite for developing and strengthening the economy so that we can have a basis for an effective defense capability.

We reiterate our solidarity with the working people of China and the US, that they too oppose the imperialist agenda of their governments and promote peace instead of imperialist aggression.