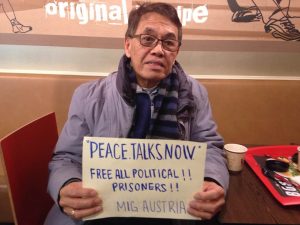 Dear Mr. President,
We strongly urge you to reconsider you decision to terminate the government’s peace talks with the National Democratic Front of the Philippines (NDFP).

Now that the talks have hit some roadblocks, it would do us well to remember that well ahead of your formal proclamation as the nation’s 16th President of the Republic of the Philippines, you identified pursuing peace negotiations, specifically with the National Democratic Front of the Philippines, as one of your priority initiatives; the talks, which resumed with a high level of mutual trust and confidence in August last year, have achieved breakthroughs in so short a time:

With a comprehensive peace agreement, we all stand to gain. The foremost concern of both parties in the peace negotiations is the interest of the Filipino people to address the roots of poverty and achieve a just and lasting peace. For it is the welfare of the poor Filipinos, in their millions, that is at the core of the peace negotiations.

Together with peace advocates in the Philippines and around the world, we forcefully back a peace deal that will address the roots of the almost 50-year armed conflict and create conditions that will ensure genuine, equitable, sustainable and just development.

Let us give just and lasting peace a chance. Continue the GRP-NDF peace talks and pursue socio-economic and political reforms for the people. Address the roots of the armed conflict! Honor and respect all agreements!