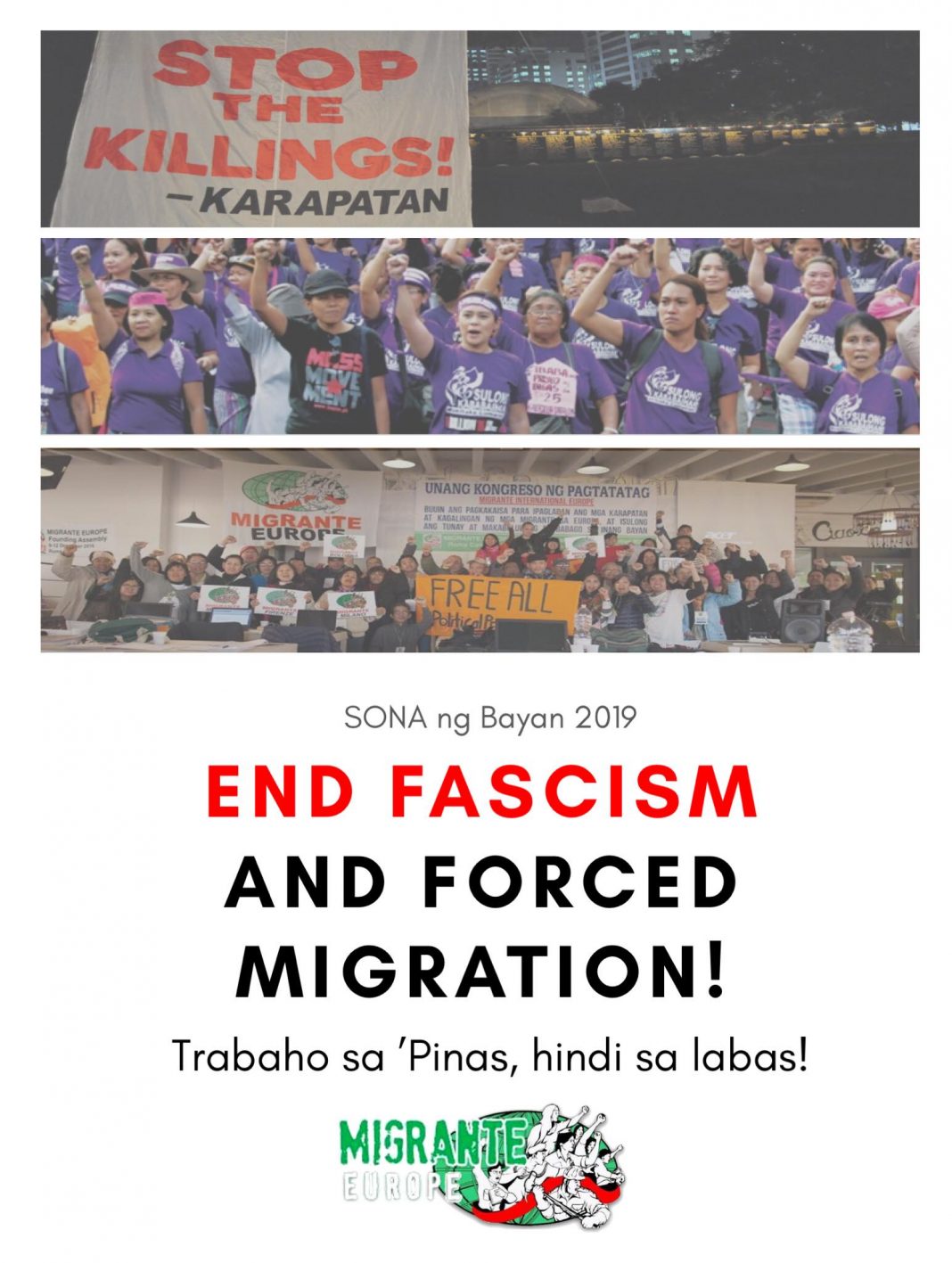 Today, Filipinos in Europe firmly stand with the United Peoples’ SONA to repudiate President Duterte’s 4th State of the Nation Address and to defend the nation’s sovereignty, democracy and human rights.

In spite the red-tagging tactics of Dutertes’s high ranking military officials of selected international organizations and progressive groups, on their visits and speeches before Filipino communities in Europe, many migrant organizations remain committed in their advocacy to expose the truth and to condemn in the strongest possible terms the continued violence and  killings  in the country perpetrated by Duterte’s military and police.

Enough of Duterte! Enough of treachery! Step down or be ousted! Duterte’s cowardice and puppetry to China by handing freely the country’s territorial rights to the West Philippines Sea is a blatant betrayal and denial of the Philippine’s sovereign rights. The refusal of the government to seek justice and let China pay for the sinking of a Filipino fishing boat by a Chinese vessel near Recto Bank in the West Philippine Sea shows where Duterte’s loyalty lies and whose interest he is protecting.  His decision to allow China to fish in the country’s exclusive economic zone is outrageous and condemnable.

Duterte’s close relationship with the US like many of his predecessors has only brought forth a more alarming human rights situation. Under the US-designed counter-insurgency program of the Philippine government, more victims are expected to become victims of state terrorism, and Duterte’s war on drugs or “war against the poor”, has killed more than 23,000, and countless numbers of  illegall arrests, detentions, tortures and extortions by Duterte’s death squads in police and military uniforms.

Duterte’s withdrawal in the peace talks between GRP and NDFP only tightened his subservience to US imperialism and has dashed hopes of achieving ment to a just and lasting peace.

Continued implementation of neo-liberal policies, contractualization, and anti-people policies and programs, has brought thousands of workers to become more vulnerable to trafficking, forced labor and abuses, and, 6,000 Filipinos are forced to leave and work abroad every day.

Filipinos overseas face many problems and issues particularly Filipino women.  Disregarding the inhumane condition of OFWs and their families abroad, the Philippine government remains deaf to the cries of OFWs, instead, Duterte’s regime continues to invent unjustifiable and excessive fees to extort money from OFWs. Last February, President Duterte signed a law requiring expatriates to make a compulsory contribution of 960 pesos a month to the  Social Security System or SSS. As for rules, no overseas employment certificate  (OEC), which is a prerequisite for Filipino expats to return abroad, will be issued if the monthly premiums are not paid.

Italo- Filipino in coordination with UMANGAT-Migrante,

July 21, Protest in Amsterdam, The Netherlands

saPransya with participation of progressive organizations: