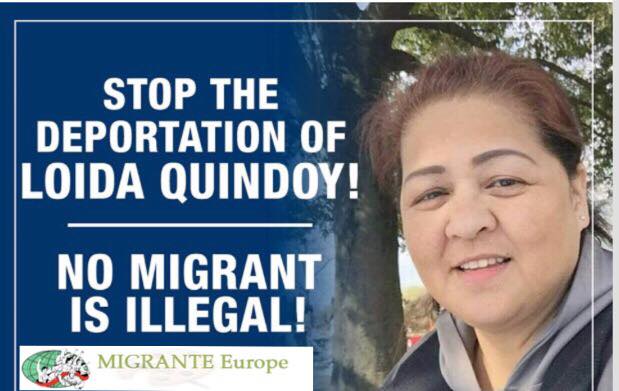 Migrante Europe strongly calls on the government of Japan to stop the deportation of Loida Quindoy.

Loida Quindoy is a 56 year old Filipino mother and grandmother facing involuntary deportation in Japan after the Ministry of Justice on October 11, 2018, canceled her provisional release. Her deportation was originally scheduled on October 18, 2018, was temporarily stopped after Migrante Japan and other groups protested in front of the Tokyo Regional Immigration Bureau on October 17.

Loida came to Japan in 1996 by virtue of her marriage to a Japanese national. She however, filed for divorce in 2000 because of her husband’s verbal and emotional abuse. As a result, Loida lost her 3-year long-term residence status.

For four years, Loida lived with a Filipino who at that time was an “overstay” or undocumented. In 2005, he got arrested and was deported to the Philippines.

In 2007, Loida decided to marry him in the Philippines and upon her return to Japan filed for his eligibility so that her husband can join her in Japan. She was unaware of new immigration policies and the bad immigration record of her husband: two counts of overstaying and used of assumed identity. By signing his application for eligibility however, Loida became a co-conspirator. In 2010, in spite of undertaking voluntary confession before the Tokyo Regional Immigration Bureau, her husband was detained and was deported to the Philippines in 2011.

Loida, on the other hand, was investigated and was found guilty of aiding her husband’s return to Japan in 2007. Her permanent resident status was revoked in 2012, which she obtained in 2009 because of hard work and fervently paying her tax dues.

Loida underwent deportation proceedings and was given a provisional release. Because she was not allowed to take the paid job by the court, Loida sustained herself only through the help of family and friends.

On October 11, 2018, Loida’s provisional release was canceled without warning and was immediately detained and a week later she was scheduled for deportation.

Loida is a victim of injustice; the decision of the Ministry of Justice to revoke her permanent residency was too harsh a punishment. And now being subjected to involuntary deportation is much worse.