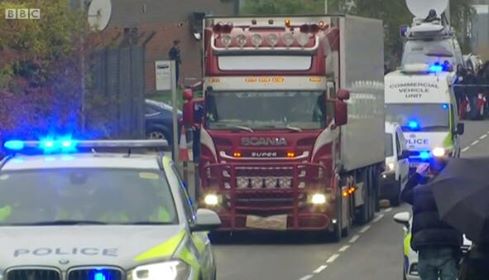 Migrante-Europe express with great sadness on the death of 39 people inside a trailer truck found in Essex, the United Kingdom on Wednesday, 23 October 2019.

As authorities continue to investigate the incident and to identify the names and nationalities of the fatalities, Migrante-Europe joined the growing voices around the world to seek justice for Essex 39.

News reports that relatives of those feared to be found dead inside the trailer are able to receive text message bidding goodbye and saying “her trip to a foreign land has failed”, and that many of the victims had left their homes and community paying huge amount of money to human traffickers are indicators how people in the poor countries are desperate to take chances to change for better their life situation.

Migrante-Europe believes that migration is related to underdevelopment and poverty. Social and political injustice and economic inequality in the home country pushed many people to cross oceans and continents hoping that at the end of their journey a new hope and future will rise. The United Nations report on the number of international migrants globally reached an estimated 272 million in 2019, an increase of 51 million since 2010.

In the Philippines, there are about 6,000 Filipinos leaving the country every day. Even though Filipinos share their intellectual gifts giving a substantial contribution to the economies of both the host and their home countries many still experience degradation, exploitation, suffering, and deaths. Chapter organizations of Migrante International from various countries and regions are challenged by issues confronting many Filipinos with contract violations such as Non-payment of salary, lack of benefits; mental and physical abuse, sexual harassment, rape and murder. ###